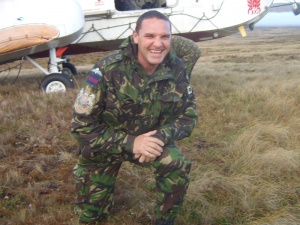 WO1 (RSM) Chant was born in Walthamstow on 5 September 1969. He completed his basic training at the Guards Depot, Pirbright, in 1986 and was deployed to South Armagh, Northern Ireland, in 1993.

After an attachment to the Pathfinder Platoon from 1997 to 1999, he returned to the 1st Battalion Grenadier Guards before being posted to the Royal Military Academy Sandhurst (RMAS) as a Colour Sergeant instructor until 2003. At Sandhurst WO1 (RSM) Chant quickly made a name for himself with his straight-talking, no nonsense approach to training and soldiering.

After two years at Sandhurst, WO1 (RSM) Chant rejoined the 1st Battalion Grenadier Guards. As the Company Sergeant Major of Inkerman Company he deployed to Bosnia from September 2004 to June 2005 as part of NATO's, and latterly the European Union's, peacekeeping operation.

On return from Bosnia he was posted back to RMAS as a Company Sergeant Major from August 2005 until December 2006 where he met his future wife. After a year at RMAS he returned to the 1st Battalion Grenadier Guards, firstly as a Liaison Officer for the battalion while deployed to Afghanistan on Operation HERRICK 6 in 2007.

WO1 (RSM) Chant was the Senior Warrant Officer within the battalion. In this position he was a natural figurehead for all the Grenadier Guards and was unflinching in his pursuit of the highest possible standards. WO1 (RSM) Chant was carved from the very rock that forms the foundations of a regiment.

He was a role model for those beneath him and was an invaluable colleague for anyone that worked alongside him. The day before WO1 (RSM) Chant was killed it was announced that he had been awarded a commission in the Grenadier Guards as an officer. It is a tragedy that he was due to be informed of his success on the day he was killed.

WO1 (RSM) Chant leaves behind his beloved wife Nausheen or 'Sheenie'. He also has three children from a previous marriage, Connor, Victoria and Adam.

WO1 (RSM) Chant had risen to the highest possible level within the regiment. After the tour it was his aspiration to go to the Royal Military Academy Sandhurst as Academy Sergeant Major. It was then his intention to commission and join the Grenadier Guards' Officers' Mess.

"I am devastated by the loss of my husband. Our unborn son will never meet his father, but he will know him through his legacy. For whether in uniform or out, his incomparable courage and selflessness humbled all those who knew and loved him.

"His famed sense of humour lightened any situation. I will miss my best friend and nothing will fill the void he has left, my darling Darren. A natural born leader who led from the front. I am immensely proud to say he was my husband."

"The whole world should know that Darren Chant was the best father any child could have wished for. He adored and lived for his children. He strived to be the best at everything he did.

"He was very passionate about the military and believed the British Army were doing a good job in Afghanistan. He was a first class soldier, always putting the needs of his men before himself. He was always the first to volunteer.

"We feel cheated as we know that we will never experience his quick wit and dry sense of humour again. His loss has devastated everyone who knew him and he will be missed and loved forever."

"Darren Chant, the 'Sarn't Major', died only a few hours ago, at the hands of men he was helping. His death is profoundly sad for the Grenadier Guards and our Battle Group.

"He was the senior soldier, and cast from the original model of a Guards Regimental Sergeant Major. He was such a big character. He knew the answer to all our problems; he could make anyone laugh; and he worked tirelessly for everyone in the Battle Group.

"He relished the opportunity to put himself where his soldiers were. He had a deep instinctive wish to make a positive difference to the lives of our soldiers and the Afghans, so he put himself forward to better understand the operation from the ground up.

"And thus he found himself commanding a team from the Headquarters, working with the Afghan police in a small village in southern Afghanistan. In a few short weeks he'd changed the relationship between the police and the villagers for the better.

"To them he was the face of integrity and professional conduct, and on him rested their hopes for a better future. But his success was a threat, and he was cowardly struck down.

"The sun has set here in Afghanistan, and with it has gone a tremendously brave soldier and personal friend, taken down in his prime. He had such a bright military career ahead as a Late Entry Commissioned Officer. He's on a journey home now, borne with all the dignity this proud man deserves, to an adoring family. They can be so proud of him.

"All that remains here is an enormous gap in our ranks; but in time our memories of him will overfill the void."

"WO1 (RSM) - 'The Sergeant Major' - Darren Chant and I have served together for 18 years. He was one of the most immaculate men I have ever known - in all senses of the word: in his turn out, his professionalism, his inimitable style of robust compassion and above all the exceptionally high standards he set for himself before others.

"In the last 12 intensive months prior to the tour I have come to know, like, respect and trust him more and more each passing day.

"He was a rare individual, possessing both an imposing physical presence and an imposing personality. No-one who met him even once is likely to forget him. He has inspired, shaped and 'gripped' many a young officer either at Regimental Duty or during his postings to the Royal Military Academy Sandhurst as an instructor of future generations of officers.

"He was being considered, and was a leading runner, for the top Warrant Officer's post in the British Army, the Academy Sergeant Major.

"There are many competing facets to deploying a battalion on contemporary operations and The Sergeant Major is the key player in resolving most of them.

"We would have daily discussions with the Operations Officer on how to tackle the next issue. I knew that once he had it in his grasp, the problem was gone.

"The indelible memory I have of him is standing in (and filling) the doorway after each such discussion saying, 'Not a problem, leave it with me, Sir, I'll sort it'. And so he did."

"Daz Chant was not only a good friend but an outstanding soldier to work alongside.

"His death is a huge loss to the regiment and my immediate thoughts and sympathy are with his family, his wife Sheenie and his children Connor, Victoria and Adam, of whom I know he was hugely proud.

"He was a man that you would only have to have had the briefest of dealings with for you to remember him forever.

"He was a big bear of a man and his presence was what anyone would expect from a Regimental Sergeant Major, a larger than life character who would always have an opinion and would tell you whether you wanted to hear it or not.

"No-one could ever escape his eye, if you were in his gaze it was either going to be painful or painfully funny, never in between.

"He had an infectious sense of humour that would make his mates roll with laughter and they in turn would tease him that all of his impressions sounded the same; he, with colourful language, would always disagree.

"Passionate about his role as the top soldier in the battalion, and even more so for the soldiers under him, he led from the front and would take the phrase 'Don't ask people to do something you would not do yourself' to the letter.

"For a huge man his fitness was legendary. As an ex-Pathfinder he would never give in and never come last at anything. He and I would run most lunch times and sort the regimental world out; well, he would sort it out, and I would concentrate on keeping up with him.

"On a previous tour of Afghanistan I was present when he carried an injured man in full kit at night across uneven ground for two kilometres, chatting to him all the way about drinking, fighting and his beloved Inkerman Company.

"Daz was an immaculate Regimental Sergeant Major and it was a tremendous honour and privilege to have known him, to have drank with him, to have laughed with him, and to have been a Grenadier alongside him."

"Daz took over the battalion following on from the end of Operation HERRICK 6. From the outset he made his mark and set a standard from which he never faltered.

"Socially he had the most wicked sense of humour; he lived his life to the full. To recount his exploits would take a book, the ups, the downs, the funny and comical.

"I would read it over and over apart from the last page, a page I would never turn. He was a good friend and a true professional, I and the regiment will miss him. My thoughts go to his wife Sheenie and his children Connor, Victoria and Adam."

« back to Book of Remembrance