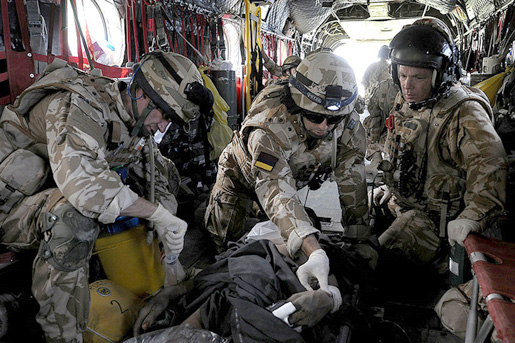 Concerned by the rising rate of casualties in Afghanistan, Captain Anthony Roupell, a former Grenadier officer, participated in the gruelling Étap du Tour cycle race which follows Stage 15 of the Tour de France through the Pyrenees. By the end of July 2007, he had raised over £27,000 for the Regiment’s wounded soldiers.

Major Grant Baker, the Regimental Adjutant at the time, judged that existing Regimental charitable funds would most likely be inadequate to meet the escalating welfare demands of the post-2000 campaigns and identified the need for a separate fund with its own fundraising mandate.

Following consultations with Colonel Euan Houstoun OBE (President of the Regimental Association) and Brigadier David Maddan (The Regimental Lieutenant Colonel), the project quickly took shape and Lieutenant Colonel Patrick Holcroft OBE was invited to chair the new fund. Soon after, HRH The Prince Philip agreed to be its Patron.

The Colonel’s Fund was officially launched at the Guildhall in the City of London on 21st February 2008 on the return of the 1st Battalion from Helmand. Today, it employs a full-time Regimental Casualty Officer, Matt Elmer, who manages the wounded veterans’ caseload and liaises with the bereaved families.

More from: The Colonel's Fund