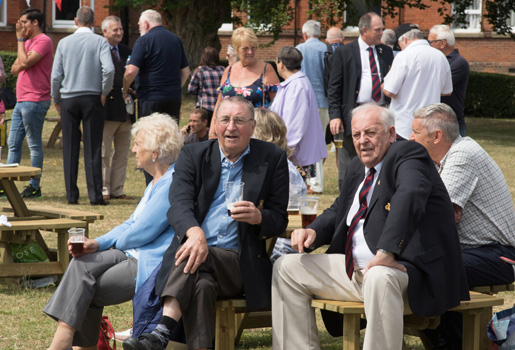 The Grenadier Guards Regimental Association was formed in 1913, and currently consists of approximately 6000 members amongst 30 Branches and a further 4000 personnel listed on the Nominal Roll, who are not formally Branch members but remain involved in one way or another. The President of the Association is Colonel Richard Aubrey-Fletcher. Association Headquarters helps organise Grenadier Day and Regimental Remembrance Day in May each year which consists of a Memorial Service in the Guards Chapel, Wellington Barracks and a wreath laying ceremony at the Guards Memorial on Horse Guards Parade. Association Headquarters coordinates the activities of the 30 Branches, most of which hold an annual lunch or dinner for their members. One of the most important aspects of the Association is, through the Regimental Welfare Committee, the administration of welfare assistance to Grenadiers or their families who are in need, this welfare assistance takes the form of financial grants, modest allowances, and Christmas gifts.